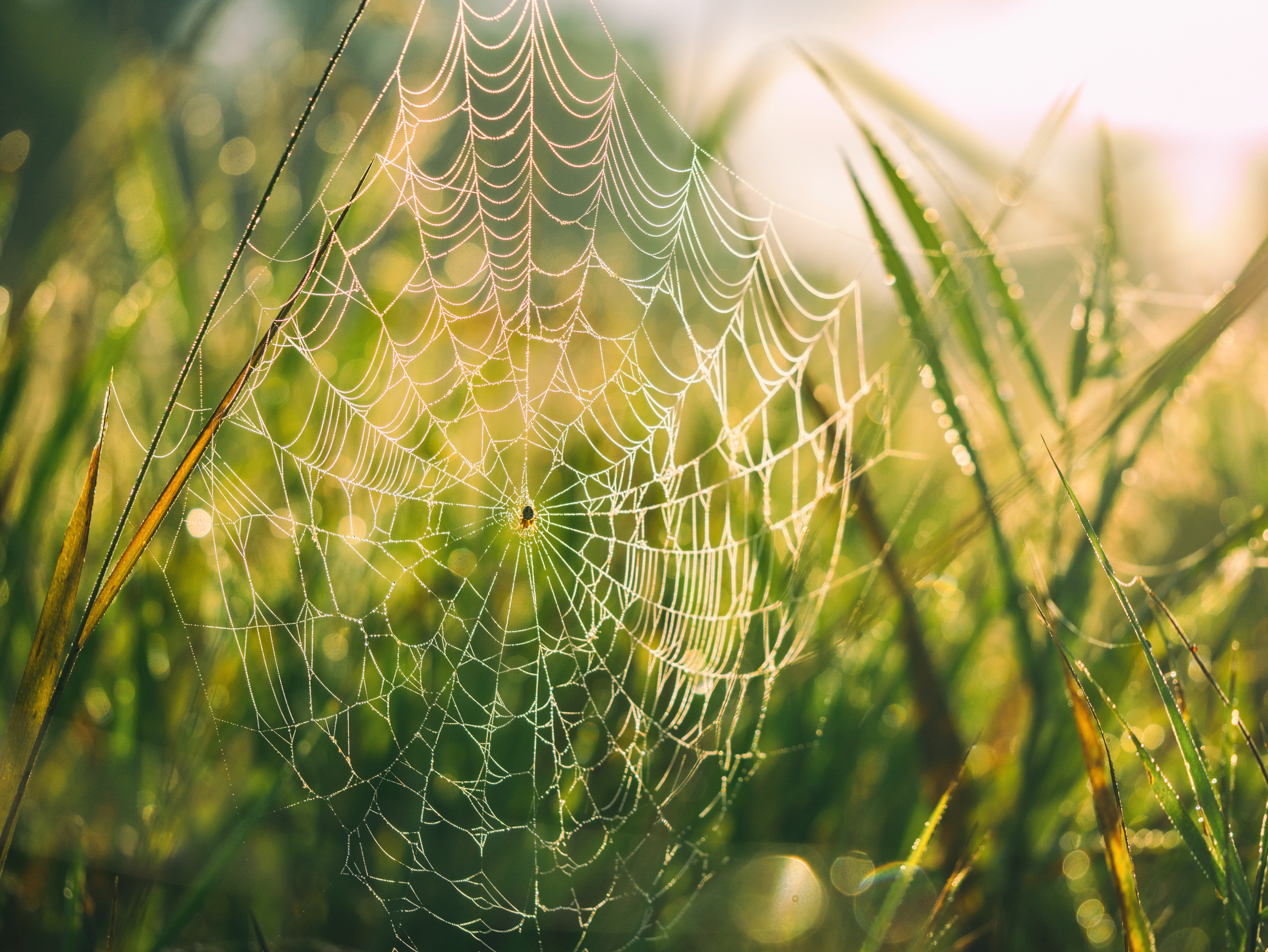 I have an arachnophobic friend who once jokingly said: “If spiders were never created, the world would have been none the worse!” Despite my friend’s sarcastic tone, this statement does raise a reasonable question: Why indeed did God make such widely feared creatures? I believe the most straightforward but correct answer would be, “because He willed it”, and in truth we can never know the full extent of God’s plan for these often-terrifying beasts until we meet Him face to face. However, we can surely derive a few points, after all, God reveals His attributes in each and every one of His creations (Job 12:7-10) and this is certainly no different in the spider. One of the earliest men who realised this was the famous preacher, Jonathan Edwards. He wrote a whole letter describing meticulously the spider’s great abilities. He was so impressed by them, even so far as to state that “of all insects, no one is more wonderful than the spider, especially with respect to their sagacity admirable way of working” (Edwards, n.d.). But this is not all he does, for he also connects the condition of the spider to the kindness and wisdom of God, and this is what I shall also attempt to do in this article. It’s true that science of Edwards’ time pales in comparison to our own, and I would be ignorant to say that his conclusions from the 1700s are completely true today. But his spirit in seeing that any natural phenomena is reflective of God’s own attributes is something that must be mimicked by all Christians, especially Christian scientists. This work is made easier by the wealth of scientific knowledge available in this modern era, and I intend to use this very knowledge in seeking God’s greatness presented in the spider.

From looking at the spider’s bodies and the skills they possess, we already see proof of  the Creator’s deliberate design. Indeed, several kinds of spiders seem to be equipped with many amazing characteristics. For example, the diving bell spider (Agyroneta aquatica) can fashion its webbing into canopy that traps air underwater into a sizeable air bubble. This allows the spider to eat and mate inside of the bubble, living most of its life submerged, surfacing only to replenish the bubble’s gas supply (Ruether, 2017). Another astonishing arachnid is the net-casting spider (Deinopidae), capable of creating webbing that it attaches to the front legs which it can stretch around oncoming prey to grab them, a skill that earns the spider its name (Gray, 2014). Both creatures create tools with their silk that are similar to mankind’s own, which is not surprising considering that God is the source of all knowledge (Proverbs 9:10). And as God has gifted knowledge in crafts and science to man (Exodus 31:2-11), it would not be surprising that he gifted other creations some part of this talent as well, albeit in a lesser quality. One could also mention the beautiful coloration and courtship dances of the Australian peacock spider (Maratus sp.), so small and seemingly insignificant that many of its species went undiscovered until the 21st Century! (“Maratus”, 2018) But despite their size, God dresses them in the most vibrant of colours, similar to how He dresses the short-lived lilies (Mat 6:28-30). There are various other examples belonging to the wide array of unique and wonderful spider species, but we do not even need to look far from home to see the ingenuity of a common orb-weaver spider’s propensity for architecture with its intricately designed webs, which also shows the ingenuity God gifted to His creatures. With all these examples in mind, it seems strange that God would equip spiders with such wonderful traits if He did not care for their existence. But what purpose could a spider fulfil with these gifts?

Before we move on, we must first define what biblically constitutes as life. While we are familiar with the popular and scientific definition of life, the Bible defines life differently. The word nepes/nephesh is used to describe the soul or consciousness, along with ruah/ruach referring to the breath of life. Both words are used mainly to describe human lives, but they have also been used in relation to many animals such as birds, reptiles, mammals and sometimes even fish, although the latter word is rarely used in this regard (Pitman, 2014). There are other articles that possess better detail on how the Bible defines life, more so than what is needed here. What is important to note is that insects and other invertebrates are never said to have this life, and they might be understood as very complex machines instead (Cosner, 2016). But despite being categorised as non-living, God does care for these types of creation as well, seeing as. they were often mentioned in the Bible. Plants were often used in Christ’s parables, likening us and Himself as various flora, most prominently in John 15:1, with Him being the grapevine and us its branches. As for invertebrates, God has used the ant as a good example of how to live (Prov 6:6-8), He used locusts to curse Egypt (Exo 10:14), and He even likened Himself to one of the insects, specifically the moth when describing His wrath, being a slow destructive punishment which lay unnoticed until it is too late (Hosea 5:12). These examples show God using the creatures to express both grace and judgement, but through other verses in the Bible we know that they were all created to glorify God and show His wisdom regardless of their specific roles (Psalms 19:1-4). Do note however, that not every researcher agrees with the life and non-life distinction, they argue that invertebrates also possess life through other qualifications such as having blood and flesh/muscle (Stambaugh, n.d.).

But with this division of life and non-life, we get a clearer picture of the initial plan for these eight-legged arthropods. Many Biblical creationists believe that since spiders and insects are not “alive”, it is plausible to say that they could “die” and be eaten even before the fall, similar to the death of plants before the fall as they became food for the animals (Gen 1:30). As some insects were used for the reproduction of plants, both through pollination or seed dispersal, it is believed that spiders as well as other predatory insects were created to quell the numbers of these insects from becoming too numerous (Cosner, 2016). This makes it possible for spiders to be a part of God’s “very good” creation.

But with the mention of these functions and wonders, one must address a somewhat justifiable reason for the hatred and fear of spiders. This is regarding their venom, the painful and/or deadly substance spiders and other insects use for both hunting and defence. We see that almost all spiders possess some sort of venom, although not all of them are life-threatening (Nentwig & Aitchison-Benell, 2013). If you consider that these spiders needed venom to kill their prey, which we have established can happen before the fall, then it should be no problem admitting that it was once considered good as a part of creation. However, what makes the statement difficult to accept is how this venom can very negatively affect humans. Spider venom has been shown to be made of a very complex mixture of toxic proteins with varying effects. One example is the venom of the Sydney funnel-web spider (Atrax robustus) which is made up of 40 different proteins, which make the venom extremely deadly to humans and primates, but not so for other animals (Hardy & Ryan, 2016). This degree of complexity and specificity does indicate deliberate design, but then why would God create these spiders to be this deadly? The Bible does not speak thoroughly about spiders, only mentioning them in passing in the book of Job (Job 8:14), even then God condemned the man who gave these statements against Job, so this statement’s accuracy is questionable. But the Bible does mention other venomous animals such as scorpions which are closely related to spiders while also possessing venom, although it is located in the scorpion’s tail stinger instead of the animal’s fangs. In these cases, venom is seen as something terrible, the scorpions and their stings are used to symbolise pain and torture (Luke 11:12; Deut 8:15). This is completely reasonable, as the pain induced by these animals, as well as suffering in general are a result of the fall (Genesis 3:16-19). Spiders, scorpions and other venomous beasts were not supposed to use their deadly defences against humans (Cosner, 2016). In relation to this, perhaps the fear of spiders was God’s way to keep mankind away from death, or even a manifestation of humanity’s own fear of death. It is possible that both statements are true, since it is fitting that many common fears are associated with things that can harm a human being; as stated above, this harm came about only after the fall. The spider then becomes another reminder of mankind’s sin and inability to subdue the whole of creation as Adam and Eve once did before the fall. As the creatures were once supposed to fear and tremble before mankind (Gen 9:2), the opposite is now true.  However, Christ has saved us from death’s clutches so that it no longer has dominion over us, signified in that famous and thematically appropriate verse “O death, where is thy sting? O grave, where is thy victory?” (1 Cor 15:55 KJV). To the believer, spiders and other venomous creatures should no longer be a symbol of death, and our fears of them should be lessened. For even if we are to die from their bites and stings, it shall not matter for death shall not take hold of our souls. This does not mean that we should not be careful around spiders however, but since we are now secure in our salvation in Jesus Christ we can now focus on the good that God has created in these terrifying beings. Or if we are still afraid, we ought to take hope in the fact that God shall restore venomous creatures to be good when we see them again in heaven (Isaiah 11:8). It is possible for unbelievers to appreciate the intricacies of the spider, but those who fear them shall find it difficult to see that greatness. Instead, through their fears and phobias they themselves express, perhaps subconsciously, how they wish to escape death and suffering. (JTY)

Edwards, J. Of Insects and Spiders. Retrieved from http://www.apuritansmind.com/puritan-favorites/jonathan-edwards/scientific-writings/of-insects/

Ruether, B. (2017). Spider Man Meets Aquaman: Unraveling the Superpowers of the Diving Spider. Retrieved from http://ketheridge.sites.gettysburg.edu/Bio340Fall2016/tag/diving-bell/

Stambaugh, J. ‘Life’ according to the Bible, and the scientific evidence – creation.com. Retrieved from https://creation.com/life-according-to-the-bible-and-the-scientific-evidence